Warning ~ If you blush easily or are under 18 than this post is not for you! We're going to talk about shhhhh...SEX:)

I cracked up the other day when I went to the local Ambience store to help one of my clients choose her first vibrator. As we went to the counter I noticed a small package with the words.. "Ben wa Balls just like those used by Christian in 50 Shades of Grey". I was amazed to see these sex toys which have been used happily by women all over the world for centuries being repackaged to suit a newer, less familiar and less experienced American public. I lost it..I didn't know that they'd ever gone out of style:) I bought a pair of them for fun but I  have to say..go to an Oriental shop and get the real thing. These were cheap and unimpressive!

I'm a 50 plus year old woman who cut her teeth on the likes of Colette and Anais Nin so quite frankly I found "50 Shades " as a novel rather silly and slightly boring. My apologies to any and all who loved it. That being said I had to laugh. Ben wa Balls, most commonly called "orgasm balls" , "Geisha Balls" or "Venus Balls" should really be given to a woman as soon as she has her first child right along with a case of wonderful ale..."good for the breast milk" and a gift certificate for babysitting and a night away with her husband!

I say this because aside from being very successful at creating the desired sexual response , Ben wa balls have the ability to tone the muscles of the vaginal walls. Any woman who has ever had a baby knows just how important this is. There's a reason that our mothers (well at least my mother!) always said to do your Kegal exercises. Ben wa balls can be made of sterling silver, stainless and I've  seen some beautiful ones made of jade. The most important thing is that they are heavy enough to create a feeling of fullness in the vagina so that you involuntarily have to contract your muscles to hold them in. Yes...that feeling inspires almost continual amourousness.

Excuse me..that's the whole point for a guy like Christian Grey.

Yes..if you do this one of the side effects is that you will constantly be dragging your partner into bed but really is that so bad?

The other side effects of using Ben wa Balls are very important but very very practical. Childbirth really loosens up the muscles of the pelvic floor. Sneezing can bring on bursts of incontinence in even the youngest woman. Instead of worrying about it, buy yourself a pair of Ben wa balls and use them. Regularly. The benefits are amazing. You will be able to control your muscles such that as soon as you begin to sneeze they take over and incontinence is a thing of the past. The other thing that happens is that your muscles become so strong that you can control and contract them easily and that means alot more pleasure for yourself and your partner in bed.

Ben wa Balls are easy to use. Seriously... Please don't be squeamish! Just google them, buy a pair , some lubricant that you like and practice inserting and removing them a couple of times. Better yet? Let your partner do it!  In case you're wondering, they can't get lost and if you're that worried about it buy a pair with the string attached to both. No..they won't fall out!

Do this for yourself  and your partner !

Be ~ witched! : Bacon Explosions and the things we cook for love!

WARNING. This is not for the foodie faint of heart! 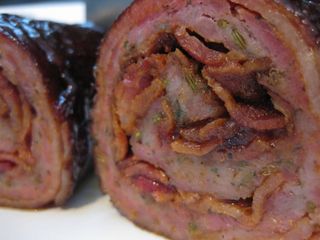 Every year, my husband takes off for one weekend to go to the Indy car races at the MidOhio racetrack. He goes with the same group of guys every year, old friends who have been enjoying each others company since high school. They take two huge motorhomes, an enormous tent , a full bar and a massive stereo system and set up on the same turn (Turn 10!) every year. They eat well, these guys are pretty good cooks in their own right. They’re known all over Ohio and beyond as the boys from the Turn Ten Tavern, they even have a mailbox! Their parties are legendary and are generally filled to capacity..they  serve hundreds of drinks every night. They have an entire security force to keep things from getting out of hand. They have fans who bring them things like the ice sculpture below that you pour shots through! As of yesterday, they've been on ESPN! 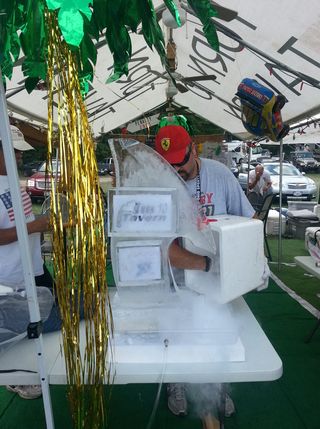 Wives and daughters are forbidden,  although I have the distinction of being the only wife who’s actually ever been allowed to go. There are a couple of reasons, but let it be enough that they are all madly in love with my cooking and there’s something lovely about having 12 fairly darling men begging you to cook for them on a weekend that’s generally reserved for wifeless debauchery. No, I don't dance on the bar, but I'll leave you to guess the other.  The only other wife that I know who cooks anything for them is my soul sister Brenda. She sends homemade sausage gravy for those classic mornings after. I’ve tasted it and trust me, she’s a bewitchingly smart sort of girl. There’s a reason her husband worships the ground she walks on.

Trust me when I say, what happens at MidOhio stays at MidOhio…oh and by the way. These are all wonderful guys who love their wives and are pretty incredible men, but even the best guys need a weekend to go completely shower free, get pig drunk and fantasize about their youthful exploits. The highlight of my MidOhio weekend? Having two fairly darling marines about half my age spend the entire evening hitting on me at the bar until they found out that my husband was the bartender! The other highlight? When they wouldn’t stop flirting with me finding my son standing behind me and in a low growling voice saying.” Back off guys, that’s my mom.”  Priceless. 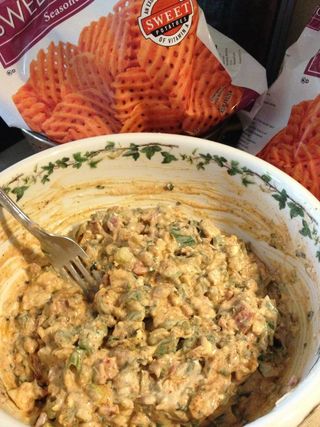 When Jim first started going to the races, I was a young wife and of course fairly nervous about it. So, I did the only thing that I knew how to do…cook so much gorgeous food for these guys that my husband couldn’t possibly forget me and that maybe just maybe, I’d someday be allowed in.  It was a good bet on my part because I was finally allowed to come…I have no problem at all being a girl being one of the guys, it’s kind of my favorite sport. I will say though that twice was enough and now I leave it to them and just get an earful when my husband comes home, but for anyone reading this trust me…you’ll have to kill me and you still won’t get it out of me. Remember what I said? What happens at MidOhio stays at MidOhio!

So every year they have their favorites that they ask me for and of course I’m happy to oblige. A few hundred sweet and sour maple laced meatballs! Tons of barbecued drumsticks lovingly basted for hours so they’re falling apart perfectly off of the bone? My secret? Slow cook them for hours in a low oven continuously turning and dusting with dry rub and wait til the end for the sauce which in my house is always made with among other things, dark chocolate, Red Stag bourbon and maple syrup . Trust me when I say that my kitchen is still perfumed and this was on Wednesday. I made homemade buffalo blue cheese dressing for them with lots of celery and carrot sticks and this year I decided to go for broke and attempt the coveted Bacon Explosion!

A Bacon Explosion is pretty amazing food. It's also fairly strange..a classic guy food recipe. Two pounds of raw bacon woven into a placemat, covered with 2 pounds of Italian sausage, lots of crumbled cooked bacon, dry rub and herbs all rolled up into a jelly roll and smoked at 275 degrees for several hours or until the meat thermometer hits 165 degrees (I opted for about 185!) and then glazed with barbecue sauce.   I’ve attached the link at the end of this so you can actually have the recipe if you’re brave or crazy enough to try to make this yourselves! Before I began I was terrified, so I went to get some liquid courage and a few guidelines from my resident barbecue expert, a guy I’ve known for year named Brett Schwartzman who works at what I believe to be the best wine store in Ohio, Pat O’Briens Fine Wines and Fancy Foods  in Pepper Pike.  The number is 216-831-8680. Do not attempt this without calling him.You’ll be happy you did! 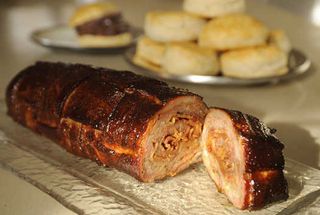 So I’m happy to say that my Bacon Explosion’s were perfect logs of smoky, bacony goodness. It took hours and it was totally worth it. I sliced a piece for myself and was blown away. Delicious..although I was left thinking that if I dipped one end of each slice in dark chocolate that it would be even more fabulous! I keep hoping that maybe , just maybe one of my favorite natural perfumers will turn that into a scent..a lickable (it has to be edible) sort of Chocolate covered, bourbon and cinnamon infused bacon perfume! I would buy it by the quart! Please!

I sent Jim off with instructions to serve a slice of it on top of a burger that has some Swiss cheese melted on it, some onion and some of my cole slaw which he did and called me completely raving about it.  This is the classic “heart attack on a plate”, but once a year? Next year I'm going to add a layer of hard boiled eggs and some smoked gouda. Overkill maybe ? Anything for my guys….

Here's the link! http://www.bbqaddicts.com/blog/recipes/bacon-explosion/ The photo of the bacon explosions are from this site as well! Here's a really great NYT's article about it as well: http://www.nytimes.com/2009/01/28/dining/28bacon.html?_r=1