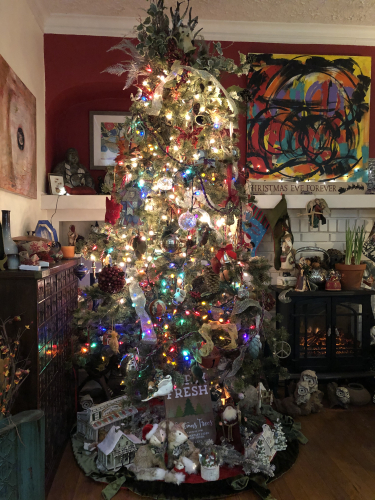 I love Christmas trees...Well actually I love everything about Christmas and the holiday season as a rule. When I was a kid growing up, until I was about 6, we didn't have a tree. We really didn't celebrate much of anything because my parents were very reformed Jews, so I never grew up having much connection to Hanukkah either. We lived in Pepper Pike, Ohio, and we were one of only a few Jewish families living there at the time. I still remember the day my older brother and sister came home and told my parents that it was time to get a Christmas Tree..."for Beth so she didn't feel like she didn't belong", but I still remember their smiles as we strung the popcorn, oranges and cranberries to decorate it.

I think that it was easy for my mother to embrace because she grew up in Champaign Urbana, Illinois, and everyone celebrated Christmas and Hanukkah there for the sake of celebrating, which in my mind is simply the most extraordinary reason to do any of this. Mom became as my sister put it, "The Auntie Mame of Celebrations!" From that moment on, Christmas became something to really look forward to in our house because from that moment on, she celebrated it with abandon. She brought back her own mothers Christmas pudding recipe and made it on occasion (it takes a month!) and one year she taught me to make fruitcake when I was too broke to buy Christmas presents. Her first cousin began sending beautiful marzipan fruits and vegetables and exquisite bourbon balls from the her old family recipes. Christmas was wonderful in my mothers house.

The year she decided I was too old for one of her Christmas stockings, I wept. Even though we are spread all over the country we all still eat her Christmas breakfast...a perfect mix of chicken ala king, stewed fruit, perfectly scrambled eggs, cinnamon rolls and Champagne. I light bayberry candles for love and luck. I keep the table set as she would have...I even have a red dining room...hers was Christmas green. 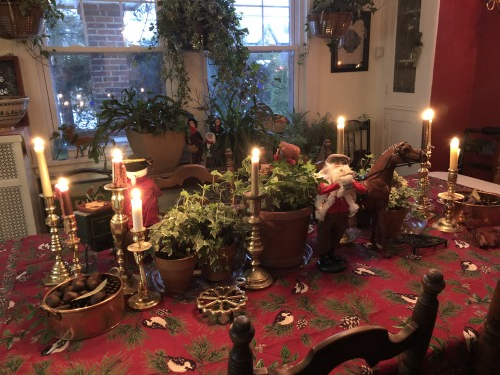 For my dad  Christmas wasn't always quite so easy. His father was a first generation Russian Jewish man and Orthodox traditions back then were the same as they are now...for the most part dogmatic and unyielding so my father became about as agnostic as you could get without being an atheist. I found out after my fathers death that I should have been named Elizabeth, but they just made it Beth Ann because Elizabeth would have been far too gentile. My mothers family does have some Catholic blood going WAY WAY back in her ancestry, but she refused to speak of it. I stumbled upon it accidentally one day when I found a rosary that had been in her family dated from 1887 and when I asked her about it you would have thought that I'd opened the darkest can of worms ever. All she said was that the rosary was older than that and we never shared another word about it although I did go digging way into the background of her fathers family and discovered hymn writers and alchemists from the 1600's although she wouldn't talk about them either, except to acknowledge that she'd known that they existed.  I realized sadly much later after her death that it was probably because my grandfather would have tried to force my father to end to their relationship. It was an interesting way to grow up...Never quite Jewish enough for the Jews and not really any sort of Christian. Fortunately due to my extremely emotionally liberal upbringing (thanks Mom!) I didn't really care and if I'm being honest, I still don't. It's probably why I most closely identify with being Wiccan...We are generally accepting of all....Harm none is our creed.

Luckily, what saved Christmas for all of us was that Christmas day was also our parents anniversary. Married during the war, Christmas Day was the only day that a Rabbi could be found, so from the moment we got that first tree,  Christmas was intertwined with the joy of their marriage. Double cause for celebrating so my father begrudgingly allowed Christmas to happen!

So, growing up I had somewhat of a conflicted relationship with Christmas or rather, much of my fathers family had a conflicted relationship with my  mothers and my relationship with Christmas.  I adored it and grew up with a store full of the most glorious Christmas merchandise ever. Carolers, bells and Christmas ornaments...every year the day after Thanksgiving, Christmas would magically appear at Schreibman Jewelers. We'd have presents everywhere, gorgeous wrappings and ribbons and mulled cider and hot cocoa for our customers.  Everyday I'd play Christmas carols and find my father trying to turn them off. He'd always grouse, but we always prevailed!  We'd have cookie decorating parties every weekend for the children with Mrs. Claus. We had holiday teas. I spent years chairing Christmas Tree festivals all over the city which delighted me to no end. Being in retail gave me the chance to have the kind of Christmas I'd always wanted, colorful and joyful, full of magic and the sheer pleasure of making everyones holiday dreams come true including my employees. Every year I'd find out what was their hearts desire, I'd get reports starting in September....we had so many beautiful things in our store that it was easy to give each of them a truly beautiful gift that they wanted. I think that those were the gifts that I enjoyed wrapping and giving most of all.  Every season we'd close early a couple of nights before Christmas and have an amazing holiday party, full of wonderful food, laughter and champagne.  We had the very best staff, I can't even call them that because they were more like family and we loved thanking them that way.

When I married Jim, he was a "recovering Catholic" with fond memories of his own fathers Christmas Tree farm and ice skating on the lake at his grandpas farms. Jim loves Christmas like an 8 year old, and that was all I needed to really go for it. Every year we decorate our home together and we have outdoor lights and wreaths everywhere. We decorate our home with carolers and hang stockings.  We listen to carols from Thanksgiving through Epiphany and eggnog and bourbon milk punch literally flow through the faucets...(not really but you get my point!) We also celebrate the Winter Solstice every year which is, I like to say, what happens when Jew-Witchy girls long to celebrate Christmas without angst! We decorate EVERYTHING and throw a huge party in my sister and brother in laws lovely cabin, complete with a fire, Yule log and plenty of delicious food and libation. 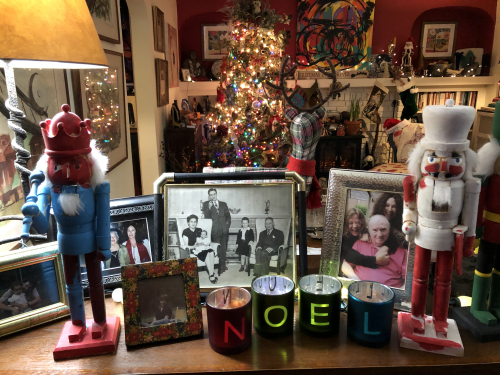 As for my father? He eventually learned to love Christmas in his later years, for the togetherness of it. He stopped pretending that anything mattered to him but love. The year that my mother had a very dangerous bypass surgery it was coincidentally the day before Christmas..their anniversary. To him, I think that it was a miracle that she survived it and he really never groused about the holidays after that. Every Thanksgiving in our home we have a ritual...we gather around the table and say what we are thankful for. For my father, every year it was the same..." I am thankful for my family". That is who he was.  After my mother was gone, he spent about three years in a nursing home in Cleveland that was primarily Jewish and we brought him home those first years for all of our holiday parties.  One year he lamented to me that because he had no money, that he couldn't buy any of us presents. Daddy had been a painter, and a very fine one at that, so I went to Michael's  craft store and bought about 6 unfinished nutcrackers. I took them to his nursing home with paints and a cd player and we spent several wonderful afternoons listening to Tchaikovsky and painting them in bright colors.  I have many of my fathers paintings, but I love these nutcrackers most of all , painted after his stroke.  They are imperfect, messy and colorful like he was. On Christmas morning he gave them proudly to all of us and we listened to the Nutcracker Suite as we had so many times before.

So the truth is,  like my mother I celebrate simply for the pure and unadulterated joy of it. It doesn't matter to me which holiday it is. I should probably be more religious, but I simply can't... I can belt out Rock of Ages from memory as beautifully as I can sing every stanza of the Hallelujah Chorus. I go to Mass with my daughter in law every Christmas Eve and sing all of the carols and watch my son laugh at me. I make Latkes and Mashed potatoes, Roast Goose and Brisket. I learned over the years that I am a sum of all of my parts...but that to be just one thing will never work for me. To me, we are all one tribe and my religion is love.

For me these celebrations are the glue and the glitter.

For me, my family is my house of worship and that will have to be good enough and if you come knocking on my door at  anytime, there will always be a place for you at my table.

I leave you with the simplest of holiday wishes from Tiny Tim..."God Bless us, Every One. "  and a bit of the Nutcracker Suite.... 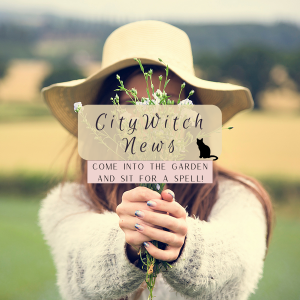