30 Days of Christmas Cheer ~ Just in time for the Winter Solstice...Bourbon Milk Punch! 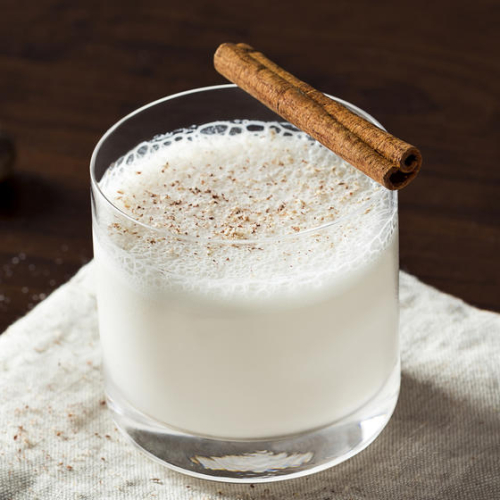 I love milk punch! This relatively old recipe is one that never seems to lose its intrigue and in my mind is a too often overlooked staple of the holiday season. I'd had it many times, but had forgotten about it over the course of many years as delicious organic eggnog became so readily available in the stores. However my good friend Justin teased me one day with the promise of a homemade milk punch that would swear me off of eggnog forever. I waited and waited and then one day he waltzed into my Solstice party with two bottles of a wonderfully creamy and decadent  wintry white drink!
He intrigued me with tales of it's creation, how it had been carefully mixed, re-poured and allowed to mellow for three days in a deep chilly snow bank. I opened the bottle and poured a small glass. It was incomparable, a divine taste of nostalgia and yet so completely modern...one of the sexiest flavors that I'd ever sipped! At first taste there was ice cold cream and vanilla but seconds later I was captivated by the flavor of a  really great Bourbon laced with a liberal sprinkling of sugar and nutmeg...irresistible!
I was astonished, how could any one thing taste so good? There is a whole lots of magic going on here....that can be the only excuse.
I have begged him for the recipe which he will not divulge. So, I have played with the recipe myself and I must admit that I think that I've done the memory of that first sip justice. Milk Punch is an ancient drink that has been reinvented many times over the centuries. Some recipes call for lemon juice but I don't like those. I prefer the experience of pure cream on snow with a bit of lemon zest for sunshine, bourbon for frolicking and lots of freshly grated nutmeg for warmth.
This recipe makes a wonderful gift to bring with you to winter gatherings. My friend delivers his in old  fashioned glass milk bottles with a request to save them for next year and promising refills! He walked into my Winter Solstice gathering last year with two of those bottles and at first sip I was smitten again! Treat yourself and use organic milk , half and half and cream. You'll get the great glass bottles that way and a much richer flavor and the benefit will be that you can start your own holiday tradition but be warned , once you make this you'll never be allowed to stop, it's that good!
For about 18 cups of heaven you will need:
4 quarts of organic whole milk
3 cups of organic half and half
2 pints of organic whipping cream
4 cups of really good Bourbon ( I splurge and use Blantons in this one)
2 heaping cups of confectioners sugar
3 tablespoons of organic vanilla extract
3 heaping tablespoons of freshly grated lemon zest
1 teaspoon of black pepper
Lots (and I really do mean lots!) of freshly grated nutmeg to taste
Simply pour the milk, half and half and cream into a bowl and blend for a few seconds. Add the Bourbon , sugar and vanilla, blend for a minute until frothy. Add the rest of the ingredients and stir. If you were bottling this and you have lovely winters snow on your hands I'd tell you to place the full bottles outside in the drifts as this will make the finished product thick and slushy! (You'll need one extra bottle to accommodate the overflow!) Sans snow, simply place the bottles in the refrigerator and allow to chill! You can even put a bottle in the freezer for about an hour before serving and it makes the finished product wonderfully creamy!
Allow enough time for the finished punch to mellow for about two days before serving or the Bourbon will taste too raw. To serve, just pour the milk punch into a julep cup or a punch glass and enjoy! If it's cold enough, no ice will be needed! If you're making it for a party, put it into a punch bowl that is sitting on top of an ice ring or in a larger bowl of ice to keep it cold but not diluted. Place some lovely wintry greens around the base of the bowl and you'll have a wonderful cocktail for a buffet that's delightfully reminiscent of a really old fashioned holiday!
Now for fun watch this great video. He makes his with Brandy which is equally as good although I do prefer bourbon myself. He also uses simple syrup while I definitely prefer the confectioners sugar because I think that it makes it thicker. His is a great recipe for one cocktail at a time. Enjoy!
Photograph from Jim Beam