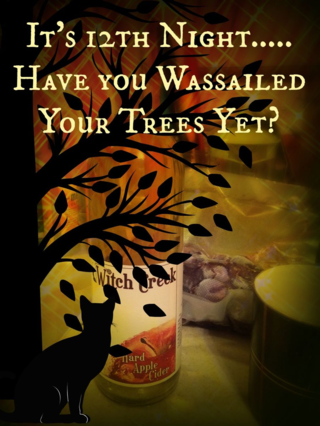 It's Twelfth Night...known as the Epiphany to some and to us who prefer the older, wilder ways it's a time to engage in bit of revelry and celebration before the Yule tree comes down. In the older, Goddess centered scheme of things, 12th Night is also a time to Wassail the orchard or in other words to take a bowl of cider into the orchard and feed the fruit trees with it to ask for the gift of an abundant harvest. We have an enormous storm heading our way here in Ohio, but fortunately I was able to get outside with Jim before it hit and together we toasted our fruit trees and fed them this wonderful bottle of Apple wine from Julian, California.

"Our bowl is made of a white Maple tree, with a Wassailing Bowl we'll drink to thee!"

Good Health to You!

With love from The Windesphere Witch

In the cider-producing West of England (primarily the counties of Devon, Somerset, Dorset, Gloucestershire and Herefordshire) wassailing also refers to drinking (and singing) the health of trees in the hopes that they might better thrive.

An old rhyme goes: “Wassaile the trees, that they may beare / You many a Plum and many a Peare: / For more or lesse fruits they will bring, / As you do give them Wassailing.”

The purpose of wassailing is to awake the cider apple trees and to scare away evil spirits to ensure a good harvest of fruit in the Autumn.{"England In Particular", Common Ground 2007} The ceremonies of each wassail vary from village to village but they generally all have the same core elements. A wassail King and Queen lead the song and/or a processional tune to be played/sung from one orchard to the next, the wassail Queen will then be lifted up into the boughs of the tree where she will place toast soaked in Wassail from the Clayen Cup as a gift to the tree spirits (and to show the fruits created the previous year). Then an incantation is usually recited such as this:

A folktale from Somerset reflecting this custom tells of the "Apple Tree Man", the spirit of the oldest apple tree in an orchard, and in whom the fertility of the orchard is said to reside. In the tale a man offers his last mug of mulled cider to the trees in his orchard and is rewarded by the Apple Tree Man who reveals to him the location of buried treasure."