Public relations gone all wrong. What has happened to the House of Guerlain? 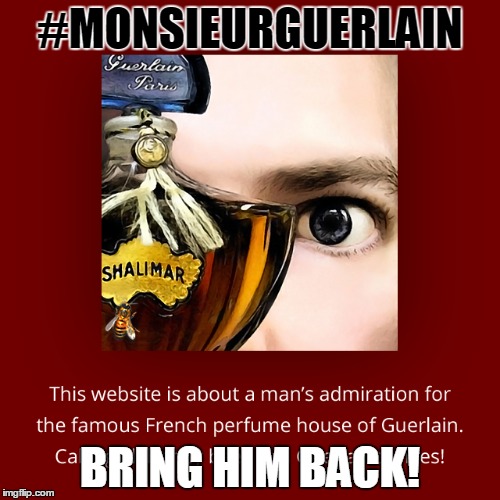 It's been brought to my attention that one of the House of Guerlains biggest fans, Monsieur Guerlain has been silenced. His blog has disappeared, his Facebook and Twitter feed are gone. We're talking about someone, who like many of us is absolutely devoted to fine perfume. He spent hours of time researching and writing, and he was their cheerleader even through some fairly dark periods like the one that I'm about to describe below. I am appalled that even though this was obviously  a trademark infringement issue that they could not have found a way to deal with this in a matter befitting such an established and wonderful old house. A gentleman's entire catalog of work is gone. It has simply been erased as if it didn't exist and he spent his own time and money creating the best possible PR for a company that he loved. It would seem that he gave them  way more than they deserved.

That being said, I and many others refuse to be silenced. I refuse as a perfume blogger, with my own opinions to allow a parent company  (in this case LVMH) to tell me what I can and can't say. They forget that we are the customer. What we think about what they produce matters. Bear in mind I am not blaming Guerlain or Dior for this. I'm not throwing out bottles of their beautiful perfumes like many have done. It's the fault of the multi- million dollar parent company that owns them now and is forcing them to produce new products that are a shadow of their former greatness. What I will say is this. I will not be intimidated by scare tactics. If you don't like what we're saying about your products then listen. Make better products.

Truly what they've done makes no sense. They could have used his fandom and his knowledge and created an amazing public relations network for this wonderful old company. Instead, some silly corporate attorney has probably overstayed his or her welcome and destroyed some serious fan loyalty (mine included) in the process.  For goodness sake, have a bit of class. No...have some brains or hire someone with some for goodness sakes. You could have gotten a lot further by offering up the Guerlain spin doctors and helping him to create a new identity that wasn't in as much conflict. You could have hired him as an brand ambassador, letting him go out to speak on your behalf.

Honor the guy as the star he is for you (provided he hasn't switched his allegiance to a more deserving  company.) Get your PR people involved and turn a potential problem into a positive for the company and for all of us. You could have used him so well. It could have so easily been a win/win with the kind of readership he had.  Instead you betrayed an entire marketplace.  My background is public relations and marketing. I truly have never seen a company shoot itself in the foot with as much naivete as you just did. I would be embarrassed for you, but you had to know what you were doing.

My dear readers. If you want to protest this heinous corporate bullying of Monsieur Guerlain , please write a letter to their public relations department at irousseau@guerlain.fr.

Like I said. What we think matters. We're the customer. I've been a Guerlain customer for decades....what has happened to you? You have cheapened yourself right out of the luxury marketplace. It's almost impossible to take you seriously anymore. At this point I feel about you like I felt when Abercrombie and Fitch was purchased by the Limited. A gorgeous old sporting goods store turned overnight into a chain store for sweatshirts and cheap jeans.  You're catering to the Sephora crowd and I mean the teeny bopper Sephora crowd. You've destroyed your history and it's horrifying.

I'm saying goodbye for now but I'm truly hoping that you'll come to your senses.

I completely agree with you on all counts, and I have been a loyal and very fragrant wearer of Shalimar since 1968.
Yes, I have dallied with others from time to time, but always returned to my true love, the real, the original, the classic Shalimar.
BRING BACK the best Guerlain spokesperson.
Thank you.

Beth, please believe me: I am also a fan of Monsieur Guerlain. I am so sorry to hear that his web content has disappeared; it was lovely, highly informative and, as someone else has mentioned, much nicer than the Guerlain website itself.

I truly believe that the only reason LVMH shut him down was to protect their trademark; the Guerlain name in connection with perfume. Remember, this corporate entity has many cases every year of people counterfeiting their goods. The Louis Vuitton and Chanel lines alone probably keep a small army of attorneys employed. For all we know, it was merely an automatic action, done without much consideration for the individual behind the fan site and facebook identity--sadly, for us, and business as usual for LMVH's IP department.

Could they have approached this matter in a more humane and reasonable way? Absolutely! If it is true that our blogger friend received no notice, then LVMH badly mishandled this and hugely underestimated the backlash from perfume fandom. A stupid PR blunder. But that is what you get from gigantic corporate interests. Sad but not surprising.

It is really too bad. Personally, I am only interested in vintage Guerlain fragrances, but I think I have enough to last me a lifetime. The makeup is nice but generally too expensive for me, and anyway, I wear less and less makeup these days.

I hope that dear Monsieur Guerlain will take comfort from his many perfumista friends and their loving support. 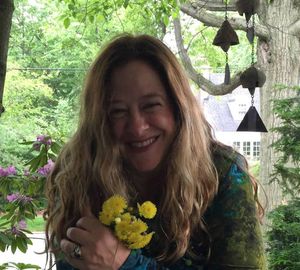 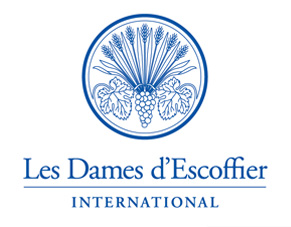